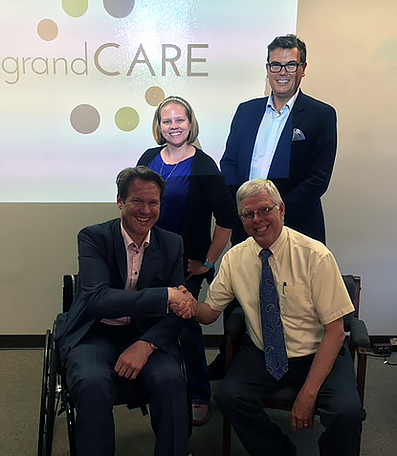 grandCARE has originated from the USA, in a small town called West Bend located 200 miles from Chicago by a gentleman called Charlie Hillman. In the early 1990s Charlie was shaken by a close call with his great aunt Clara – When he stopped in to check on her he discovered she had her windows open due to smoke and a strong burning smell. Upon investigating it was discovered that there were flames coming from the furnace.

Charlie knew there were many others who could benefit from a user-friendly system to help keep their loved ones safe. Unable to find a solution on the market, he began to design his own. Years later the widespread availability of the Internet and wireless sensors helped to turn Charlie’s early vision into a modern reality. He began developing the GrandCare System in 2003, beta-tested the product in 2005, and brought an early version of GrandCare to market in late 2006.

In the UK, Matthew Warnes founded a company called ATEL following a tragic car accident which resulted in both legs being amputated above the knee and 65% third degree burns to his body.

After more than 130 operations, Matthew’s only opportunity to live independently was to design and build a house with environmental controls and assistive and adaptive technology. He wanted to use this experience and his technology background to help others with disabilities live in the comfort and dignity they deserve.

Matthew developed ATEL into a successful business which not only gives adults with learning and physical disabilities the opportunity to live independently, it also reduces the overall cost of providing care and support for local authorities and care providers.

Matthew and his team constantly source new products and innovations which they feel can deliver a real benefit to people’s lives. In 2012 he came across such a system created by Charlie Hillman in the US. Their shared vision that people have the right to empower themselves with enabling technologies to stay healthy, safe, and happy at home resulted in a new company – GrandCare Systems Limited, bringing this world class product to the UK in 2016.

This website uses cookies to improve your experience while you navigate through the website. Out of these cookies, the cookies that are categorised as necessary are stored on your browser as they are essential for the working of basic functionalities of the website. We also use third-party cookies that help us analyse and understand how you use this website. These cookies will be stored in your browser only with your consent. You also have the option to opt-out of these cookies. But opting out of some of these cookies may have an effect on your browsing experience.
Necessary Always Enabled
Necessary cookies are absolutely essential for the website to function properly. This category only includes cookies that ensures basic functionalities and security features of the website. These cookies do not store any personal information.
Non-necessary
Any cookies that may not be particularly necessary for the website to function and is used specifically to collect user personal data via analytics, ads, other embedded contents are termed as non-necessary cookies. It is mandatory to procure user consent prior to running these cookies on your website.
SAVE & ACCEPT